Baby, It's Cold Outside

Here are some cold weather farming tips from Andrew Crush, owner of Spring House Farm and one of Progressive Farmer magazine’s Best Young Farmers and Ranchers for 2016.

Andrew and his wife Liz raise heritage breed cows, pigs and goats on their farm in western Loudoun County. “Every type of animal we raise is different, and they all have different needs during the winter months, especially when we see extreme conditions like we did last month,” Andrew says.

The Crushes raise beef cattle on a rolling 300-acre property. This year Andrew and his crew were able to graze their herd right up to last month’s blizzard using strip grazing to conserve grass. Strip grazing is different from the rotational grazing the team uses during the normal growing season.  Andrew and crew move a single wire of electric fencing going across the field just above shoulder height. The fence is moved forward giving the cows access to a single strip about eight feet wide. Since there’s no new growth during the winter months, this keeps the cows moving forward and allows them to graze year round.

In conditions like last month’s blizzard, the cows are not moved into a barn or shelter but are instead moved to a hollow with large round hay bales lined up together (“like sausage rolls,” Andrew says). A single round bale can feed a cow for up to a month when grass grazing is not an option. Andrew moves an electric wire from the top of the bale to the bottom to encourage the cows to start from the top and eat the hay with as little waste as possible.

While the cows don’t mind being out in the elements, the Spring House Farm meat goats are the most sensitive to cold and extreme weather, Andrew says. The goats are housed closer to farm buildings and Andrew sets them up with shelter, bedding and food in a triangular hut (also known as the Goat Spa).

One of Spring House Farm’s trademarks is forest finishing for its heritage breed pigs. When a typical light mid-Atlantic snowfall is on the horizon, Andrew and crew usually leave the farm’s hardy adult Large Black and Mulefoot pigs on the mountain. With extra feeders in addition to foraging, the pigs are usually just fine on their own. But in the case of extreme conditions like last months storm (and for piglets and expecting mamas), the farm crew brings them down from the mountain and sets them up in shelters close to the barn. The pigs shelter in huts like giant doghouses. Andrew takes three or four huts and places them in a circle to create a little village, with a round bale serving as both a wind-break and a food source. During last month’s mid-Atlantic blizzard, one sow delivered a littler of eight piglets in her hut at the height of the storm, and mom and babies are in good health.

As with the cows, the key is keeping the pigs’ food supply as close to their shelter as possible so they don’t have to travel for food. Fresh water is also key to keeping the animals healthy, and one of the new technologies Andrew has put in place this year is an in-ground watering system that keeps water above freezing year round. The deep shaft system pulls heat from the earth to keep water from freezing even at extremely cold temperatures. The system features a sealed trough, and the pigs flip the doors open themselves: human ingenuity combined with Mother Nature’s genius.

One of the lessons Andrew and crew learned this winter is not to leave your tractor in the barn that’s least accessible to the road. Having to hike in to the tractor last month was a challenge for Andrew and crew, but they got the job done and were able to keep the animals safe and healthy throughout a challenging week.

“As always, a little advance preparation goes a long way,” Andrew says. “An ounce of prevention is worth a pound of cure.” 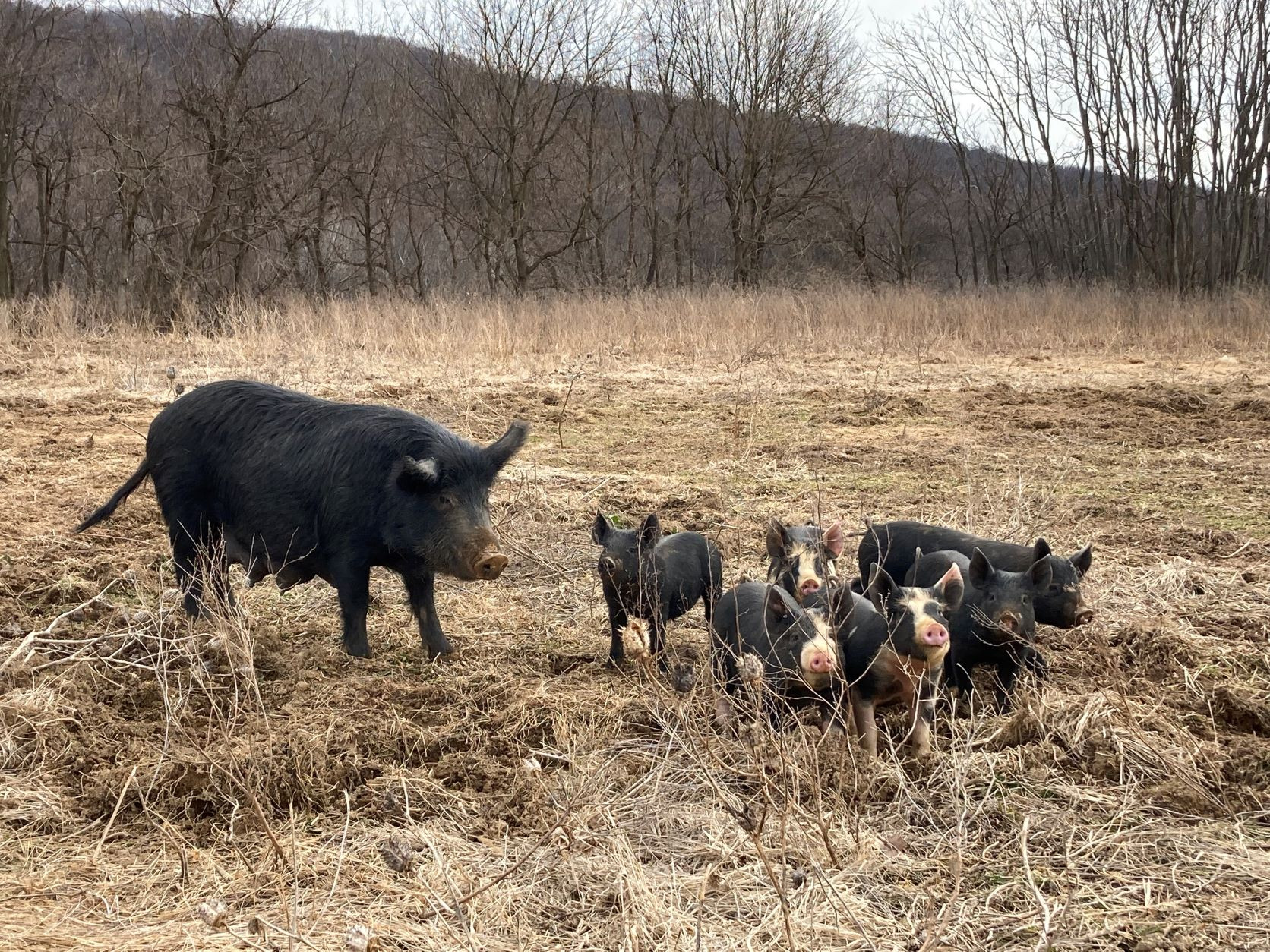